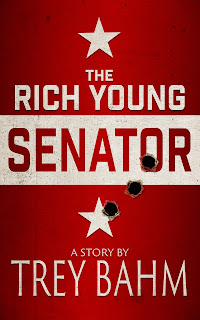 The point of departure for this one entered my head many, many years ago.  I have a cousin who serves in ministry in North Dallas, and she once remarked to me that pretty much all of America’s churches – not just the high per capita ones – were filled with rich young rulers, referring to the common name for the original story in the gospels.

The schoolteacher or middle manager may not think of themselves as wealthy, but we as American Christians do in fact behave this way.  We definitely lay hold of our political rights this way. We have achieved such a level of ‘democratic’ wealth and spiritual/societal conscientiousness in our civilization, that we have adopted the attitude of a self-reliant, yes-I’m-doing-what-I’m-supposed-to, God-fearing lord or lady.  My cousin went on to explain to me that this material-driven self-righteousness was the true scourge of the church in our country today, much more than anything like false teaching, addictions, etc.

This conversation has stayed with me ever since.

This fall will mark a loose anniversary I have in my mind of when I officially became politically active.  It was this time of year in 1988.  Another cousin had roped me into being a yard sign distributor for Republicans in my home of Hunt County, Texas, owing to the fact that I had a newly minted driver’s license and my parents’ giant ’84 Suburban.  He himself was the official Hunt County coordinator for the George H.W. Bush campaign, and he moonlighted on Wednesday nights as our youth group leader.

One Wednesday night, our regular youth time overlapped with a conference call he had with the state campaign director for Bush 41.  My cousin brought in what was, at the time, a state-of-the-art desktop conference phone he had persuaded his dad, a propane retailer, to buy so that they could talk to all his drivers across East Texas at once.  After a shortened youth group lesson, my cousin dialed in a number as a couple of us huddled around the speaker set up on a table in our pastor’s study.  In a second, a 42-year-old George W. Bush came on the phone and gave a quick status report (I will admit that today I am older than this, but not by much).  The future Bush 43 began ticking through a list of all the county coordinators in Texas working for his father’s campaign.  Texas was still heavily Democratic then, and it was not a shoo-in for the Vice-President, especially with a popular U.S. Senator, Lloyd Bentsen, filling the other half of the Dukakis ticket.

“How are ya, Tim?” asked Bush 43, like my cousin was close friend.  My cousin was the only coordinator in that long list that was addressed by name.  In that instant, I was hooked on politics. Even as a sixteen-year-old, I immediately thought, oh, that dude just has a list in front of him with my cousin’s name on it, and he’s just playing off it.  But even that nascent cynicism could not the overcome the wildfire that was really ignited in my conscious.  I fell in love with the idea that if you just showed up when a connection asked you to, the rich and powerful would know your name, and that they might even listen to you if you stayed cool.

Twenty-nine years later, I realize this has been my modus operandi for every political deed I’ve undertaken, whether I was helping a complete political rookie get elected to the school board or was trying to persuade John McCain to his face that consideration of his amendment to preserve trade with Vietnam was protected by the Senate rules, and that Trent Lott was not out to get him.

I also realize now that I have been trying to be heard by the wrong people.  I have a touch of lament that this has taken twenty-nine years, but, like my cynicism, that is not more powerful than heaven’s conviction.  But if the Trump era has taught us anything, no matter how long he lasts, it is this:  the people very much run the United States.  It has always been this way.  Sure, the engagement level of that leadership may seem to come in spurts – but our nation is absolutely ruled by the Social Security check, among others.  We ourselves are the people who must listen to ourselves.  That is the true power structure of all of us rich young rulers.

What, then, of followers of Christ?  Should we be ruling?  That’s not what Jesus seemed to tell the young man in their encounter.  Or was it?

I hope this new little story will help us all think about this question a little more, and of course be entertained.  It is all G-rated for the most part.  But, there’s your money’s worth of violence (Also in high school, I spent too many weekends helping my orthopedist dad as his surgical tech not to sprinkle in a little gratuitous bloodshed here and there).  There is a tiny flicker of profanity, but it will make sense for the character who utters it.  I may be criticized for not allowing my inebriated journalist characters to use their normal barracks English, but I think the tale is otherwise plenty realistic.

You can absolutely read this book on any device once you perform a simple download (if even necessary).  You can read it on your handheld phone!  Thanks for taking the risk and time.