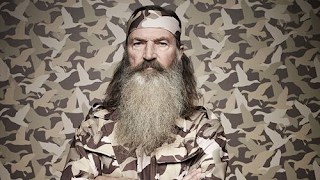 As far as it being quality television (an oxymoron, I know), Duck Dynasty is an amalgam of everything wrong with reality-format programming.  This is precisely why Phil Robertson should be regarded as one crying in the wilderness.

Our culture is receiving its end-stage call to repentance.

The very first reality-based television show ever - MTV's The Real World which first aired more than 20 years ago - didn't build a mainstream audience mainly because the real world wasn't interested in a bunch of whiny young adults.  But the real reason MTV's show didn't have a broad appeal was because it, initially, was too raw; in its early years The Real World was much more documentary-style and captured interpersonal drama simply as it happened.

Enter CBS' Survivor in 2000.  The producers of this reality-style game show recognized that in order to be successful using such a format, they nevertheless had to insert a "script" of some kind.  The average viewer may have thought she was witnessing the real reactions of spoiled Americans trying to make it on a deserted isle, but really they were watching spoiled Americans working their way through a maze built by Hollywood programmers.  There is absolutely nothing true about how survivors or real housewives go about their lives in front of the camera; every second of screen time that makes the final cut fits a carefully controlled narrative conceived by the production team.  Dramatic hook has to be created and delivered.

The narrative of Duck Dynasty is no different, and on this point it is actually a somewhat stale, contrived, warm-up-the-leftovers script where the Robertsons are actually in on the showmanship.  The Robertsons are marketers, fundamentally, long before the A&E Network knocked on their trailer door; their sales credentials are as long as their hair.  Willie and his family - especially Si! - are fully self-conscious of the fact that they are putting on a show.  They relish in playing to type.  And they are relishing all the way to the bank.  The truth about the show is that the producers haven't even had to work that hard at sketching out scenarios for the Robertsons to play into, as they are very much actors ready to sell duck calls.

Which is why Phil, the patriarch and recent scorn of the gay community, should be regarded as a 21st Century John the Baptist, anatomical comments and all.  Who was John the Baptist?  He had long hair and wore heavy, outdoor clothing (RealTree).  He was the son of ancient Jewish society's elite (a successful American small businessman).  He was loud and outspoken.  The clean-cut men of Jerusalem came out to the Jordan to see the spectacle more than hear John's rough-hewn call to repentance.  John the Baptist was not a wild, homeless outsider holding a hand-painted sign on the street corner; he was a hyperbole of the culture who dominated the ratings (if you are still bothered by Phil's crude references to female versus male anatomy; John the Baptist was no shrinking violet when it came to calling sexual immorality what it was).

John the Baptist got attention using the most basic, bottomed-out, almost stale program the culture offered - religion.  He paved the way for Christ by making noise and by offering a sharp contrast between religion and faith.  God is using the market-exploited and exploiting Robertsons to accomplish his judgment.  John the Baptist drew people in then knocked them down with his condemnation of sin.  His hearers either walked back to Jerusalem and its compromise with the Romans in the name of power, or they stayed and listened further.

Christ Jesus followed John and enacted judgment and grace simultaneously, as only God can.  Part of the way the Lord did this was by meeting us, the couch potatoes, where we were.  His baptism was an expression of obedience to the Father's will, but it was also a demonstration of his compassion to us very similar to his actual birth -- he was coming down to our level.

The terror of God's call to repentance on us, as the controversy over Phil Robertson shows, is that it is done in absolute passive-aggressive comfort.  Phil's boom-lowering condemnation of sin based loosely on 1 Corinthians 6:10 was given initially to a magazine no one reads anymore - EXCEPT homosexual men!  Then, in perfect modern media fashion, he was dismissed from the show, which suddenly made his comments NEWS!  As they say in Hollywood, there's no such thing as bad publicity.  Only a divine purpose could have orchestrated these events; other than the passion of his convictions, I do not believe Phil Robertson, his son or his agent were calculating enough to know who he was talking to, marketing acumen aside.

And so here we are, an entire society - but especially the conservative segment that largely comprises Duck Dynasty's viewership - being forced to broach the concept of sin.  How odd.  How uncomfortable.

How terrifying.  And a silly man wearing camo has done this.